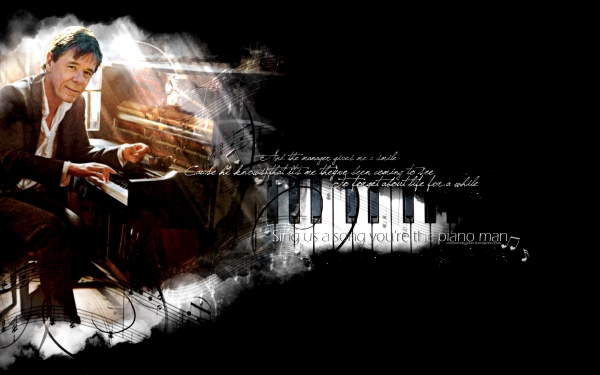 A short biography of Australian musician and composer Barry Ferrier.

After completing a degree in Psychology at Sydney University, Barry began his professional music career as a vocalist in the original production of Jesus Christ Superstar at the Capitol Theatre in Sydney and the Palais Theatre, Melbourne. He gained experience in number of theatre shows, musicals and bands, including a national tour with Steve J. Spears' Africa: the Savage Musical and a lead role in The Astounding Optimissimos at Melbourne's legendary Pram Factory, directed by Jean Pierre Mignon. Recognition of his diverse talents earned him a prestigious stint as co-music director with Andrew Wilson for the London-based Lindsay Kemp Mime Company, during which time he composed the music for their sell out London Roundhouse production of Oscar Wilde's 'Salome'. The London Times described the music as 'thrilling'. He also appeared  in "Joseph and the Amazing Technicolour Dreamcoat" (with Mark Holden as Joseph) at the Seymour Centre, Sydney.

With lyricist Frank Howson he composed two stage musicals "Magical Frank" and "The Boy Who Dared to Dream" with successful seasons in Melbourne and he produced the cast albums. He wrote the musical "Goodnight World" with Gerald Frape, and played a lead role in the Brisbane production at La Boite Theatre, directed by Mary Hickson, with whom he went on to collaborate on several La Boite productions as music director/cmposer.

He toured as guitarist with pioneering Aussie rocker Jeff St. John, played bass in chart topping pop group the Ferrets, and then appeared on the legendary ABC music show 'Countdown' and the Channel 9's Midday Show as an RCA recording artist with his late wife Cammie Lindon. He also opened for Ry Cooder at the Palais Theatre in Melbourne and toured with the Norman Gunston Christmas Show.

Seeking a break from the rigours of the music industry Barry spent a summer in the sleepy village of Bangalow, near Byron Bay in 1980 and has lived there ever since, racking up his 38th consecutive year  as an entertainer in clubs and pubs around the Byron Region and the Gold Coast.

But while treasuring the rural lifestyle in Bangalow, Barry has also kept alive a diverse career in the arts outside the area. His early interest in synthesisers and his pioneering work in computer music and digital video in the mid eighties culminated in a performance of his experimental electronic music theatre production "Dreams and Machines" at the Concert Hall of the Queensland Performing Arts Complex in Brisbane, where he spent five years as resident composer, winning the A.S.E.A. Award for excellence in the arts for his work on the children's theatre show Solomon and the Big Cat. He composed innovative quadrophonic music soundtracks for the QANTAS $3million 'Light Fantastic' animatronic parades at Brisbane's Expo' 88.

These experiences led him on to postgraduate studies in experimental computer art for which he received a PhD (thus the stage name Dr. Baz ) and a late career as an academic, with five years as Assistant Professor of Multimedia at Bond University and lecturer positions at Southern Cross Uni, CQU, Griffith University, Kingscliff TAFE and S.A.E. He has also graduated with degrees in orchestral composition, performing arts (theatre directing) and web design.

Barry also has a long track record of arts projects with aboriginal communities in the Northern Territory. He toured for the N.T. Arts Council to every aboriginal settlement in the Northern Territory as "The Secret Admirers" with the "From This Place" production. He made several trips recording aboriginal music for the Central Australian Aboriginal Media Association (CAAMA), producing the original recordings for Jimmy Chi's hit indigenous musical "Bran Nue Dae" and the Pigrim Brothers, then known as "Scrap Metal". He has made three documentaries for aboriginal community groups, one for the Tangatyere Land Council in Alice Springs, the Pitjanjatjara Land Council, and for the Tiwi in Bathurst Island. He also composed and recorded the songs and music for the radio series Bushfire Radio in collaboration with Bill Davis, which won the Golden Reel Award for Community Radio.

In the Mid-90s toured the entertainment centres of all Australian capital cities as band leader and guitarist for the late and legendary songstress Eartha Kitt, headlining at the Gold Coast International Jazz Festival which was televised nationally live by the ABC and subsequently worked as band leader for child prodigy guitarist Nathan Cavalieri.

He composed the soundtrack to the film Moments of Cruelty (dir. by Guy Morgan) and his score for "Green Tea" won the Dept. Ethnic Affairs Multicultural Award.

In 2005-06 Dr. Baz has toured Europe, Scandinavia and the UK twice as "Slim Pickens and Doctor Baz" and again in 2007 with latin/flamenco guitar trio "Poco Loco" . With Slim Pickens he has performed at the Gympie Muster, Tamworth Country Music Festival, made several appearances at the East Coast International Blues Festival in Byron Bay, and also performed 5 times at the  'Blues on Broadbeach' Festival. In 2012 he appeared  at the Byron Bay Bluesfest with Kellie Knight & the Daze, and in 2013 he appeared at Splendour in the Grass with Aysha & Dr. Baz and again in 2018 with Val Ockart. He appeared at the Mullumbimby Music Festival with Clelia Adams and the River Valley Express. He has released two CDs with Slim Pickens entitled "Cactus" and "Next Time".

As well as performing an average of 120 shows a year, Barry is a prolific graphic designer and under the banner of his web design company Byron Bay Interactive  has designed over 200 web sites. He has recently begun performing the lead role in his self-penned Johnny Cash Theatre Show , and he works from his certified organic farm in Bangalow , Northern NSW.

View the embedded image gallery online at:
https://barryferrier.com/index.php/barry-ferrier-history/africa-the-savage-musical/item/7-barry-ferrier-aka-doctor-baz-a-brief-bio#sigProId3aecd2af20
More in this category: Dr. Baz on Instagram »
back to top